North Lakes School Sing Up at the Roundhouse 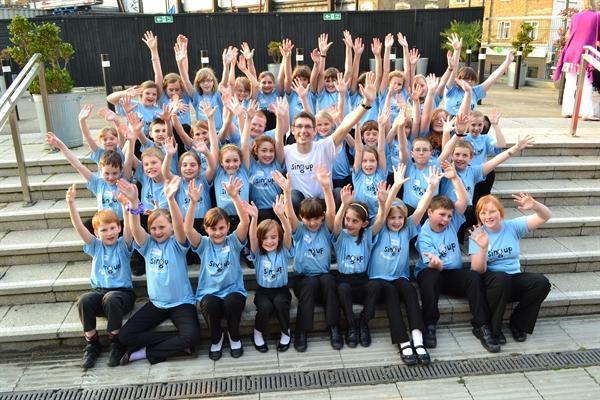 Pupils from North Lakes School Choir were lucky enough to be selected to perform and showcase their   talent at Voices  Now, a huge celebration of ensemble singing at London’s legendary Roundhouse. North Lakes, which is a Sing Up Platinum Award School, sang alongside the BBC Singers and the Latvian Radio Choir along with four other Platinum singing schools from across the country. They performed a range of pieces and were accompanied by local musician Jilly Jarman. The climax of the event was a rousing performance of This is Our World, composed and conducted by Alexander L’Estrange (pictured with the choir).
Voices Now was a four-day choral takeover of the Roundhouse and featured some of the world’s best choirs, over 1000 amateur singers, performances, workshops, talks and specially commissioned new works, with concerts broadcast live on BBC Radio 3. For this unique performance, created especially for Voices Now, North Lakes was selected from a number of Platinum Award applicants to represent Sing Up as an Ambassador singing school.Alongside them, the weekend also featured inspiring and uplifting music from The Magnets, Gareth Malone and many others. The event was a chance for the children to celebrate all things singing, with some of the best choirs in the world coming together to perform for the first time in one place, on one weekend.
North Lakes Headteacher, Mike Pincombe said of the opportunity;‘North Lakes School is proud and delighted to have been chosen to sing at the Voices Now festival. The whole school and its many supporters in the community are pleased that the years of work that have gone into developing singing is being recognised in such an exciting way. Many thanks are due to Mr Soulsby for organising the London experience for the choir.’
During the two day visit to the capital, the children were lucky enough to experience the hit West End musical ‘Wicked’, to go sight seeing and fly on the London Eye! Visit the schools website to find out more about this once in a lifetime experience.
Mrs Jones, a parent said ‘The choir were absolutely fabulous. I am so pleased that I managed to hear such a brilliant performance. I was so proud to be part of such a momentous occasion in the North Lakes Choir calendar’
The school secured sponsorship from local businesses and the wider community to help finance the trip to the London-based event, as well as pupils at the school raising funds through a Sponsored Silence.
Kate Gibson, Sing Up’s Awards Officer said;‘We were thrilled to have North Lakes taking part in Voices Now. As a Platinum Award school they are Sing Up ambassadors, a role which they have fulfilled to perfection, inspiring schools across the country with their dedication to singing.’
Over £1300 has been donated in sponsorship from local businesses and the wider community. So many, many thanks are due to: Elite Fitness, The idol.com, Dodd & Co, Abbott Lodge Ice Cream Farm, Sands, Eden Ostrich World, Bluefin, Westmorland Ltd, Victoria's, Titterington's, Lloyds TSB Penrith, Cumberland & Westmorland Herald, Ullswater Steamers, Cumberland Building Society, Penrith Lions Club, ECHO (Eden Housing Association) and Dalemain. Thanks also to the parents and helpers who joined or supported the choir on the London trip.