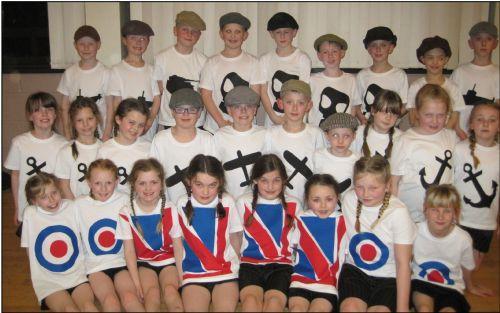 Windermere have been working extremely hard on a World War Two themed Dance this term. The children have been practisng weekly and developing their dance with Carol Chappell, a professional dance teacher, putting in 100% effort and showing great enthusiasm. Whilst developing the dance, they performed it to Ullswater and Coniston, asking for positive feedback as well as areas to develop.

On Friday the 21st of March, Windermere excitedly travelled to the Sands Centre in Carlisle to rehearse and perform their dance. In the afternoon they watched the other schools perform, before going on stage and rehearsing their own piece in their costumes and with professional sound and lighting. They then made their way up to their dressing room where Mr. Pincombe arrived with pizza for tea and cake for pudding.

After tea the children sat in the audience to watch the first act and then went back to their dressing room to prepare for their performance. When called, the children went on stage and wowed the audience with their fantastic performance which told the story of evacuees, women at work, soldiers and a VE Day celebration, before ending to loud applause and cheers all around.

Windermere certainly did North Lakes proud, their behaviour was impeccable and their performance stunning. Well done, everyone!
Top