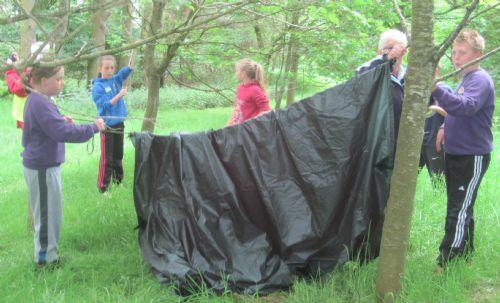 Year 5 and 6 had a fantastic day as part of the ‘Tree Whisperers project’ with Gareth Thomas.

We all went to Nunwick Hall to the forest. Our practical, interactive tree whispering day followed an exciting day at the Archives during the Spring term earlier this year. Despite grey skies looming aggressively above us as we begun our day we were all looking forward to action packed, fun filled day in the woodlands surrounding Nunwick Hall.

First we were introduced to Gareth Thomas, a friendly tree coppice worker, and his friend Iris who had previously worked for the Woodland Trust. He led us, with a spring in his step, up a steep hill to a beautiful section of the forest, packed with a range of deciduous trees, conifers and an array of plants. We looked forward to an exhilarating, exciting and energising day! 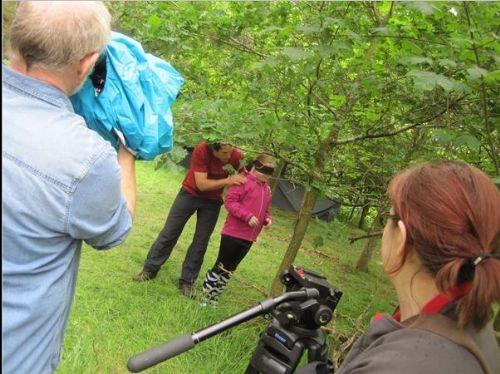 After a brief hello and introduction, Gareth distributed 5 tents to 5 groups. The brief: to erect a shelter in case of rain and bad weather. Dispersing quickly, an array of shelters soon began to take shape - we had one or two colleagues who resembled Bear Grylls! Each group was pleased with the end result, some shelters seemed more protective than others, but really we didn’t have to put them to the test!!

Gareth was thrilled as he thought most pupils worked as team members, sharing tasks, and learning to listen to others and share our ideas.

During the course of the morning we participated in various exciting activities: discussing the purposes of trees, and becoming at one with the forest which required us to use our senses, investigating habitats and identifying trees. Our senses definitely became more finely tuned as the day wore on. We had to listen, to feel when we were blindfolded; our other senses had to come to the forefront and we had to work with team members, trusting them, totally. Exciting squeals could be heard when a badger set was discovered! We also found a frog - we had to stand as still as solid fence posts so that the amphibious creature did not get too alarmed. He was scared to death though, and he was difficult to see at times as he was camouflaged perfectly in his surroundings. As we stood still, whispers, whimpers and whistling breath could be heard, however quietly! 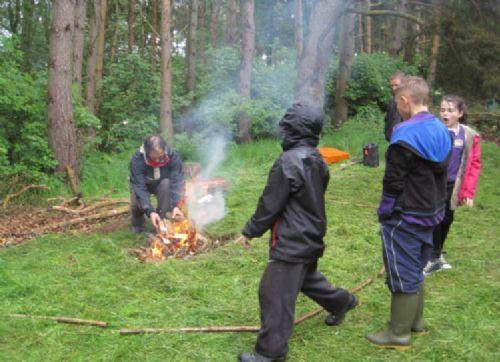 After a busy morning, hands had to be washed! Beautiful hand wash, fresh water and towels were provided, nothing was too much trouble. Then lunch was devoured, delicious sounds could be heard vibrating around the camp. Pupils were invited to partake of the meal in other shelters, nibbles were shared, it was all very civilised, that is until people finished eating, then we wanted to be off! Ready for action, although it was important to ensure all litter was collected and safely stored. We were to leave no trace - plastic does not belong in forests!

If the day was good, it only got even better. Fire lighting was the highlight of the day… yes we all got to light our own individual fires, using a steel and flint! We collected our own wood, ready for placing on the tinder, (in our case cotton wool). Then the individual fires were added to one main fire, that was lit ready to heat hazel for charcoal. Safety was of paramount importance! No one went within the boundaries set to protect us, furthermore we all knew how to sit when we lit our individual fires! Fortunately our fire was lit within a pit, very safely, it simmered furiously ready to receive the charcoal! We were all as proud as punch with our individual fires! 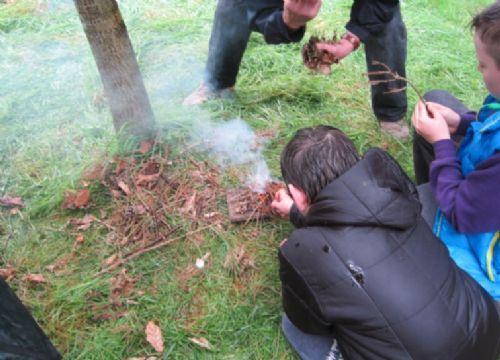 Next, potato peelers were produced to strip the bark from our twigs. Anyone ever used one? There was definitely a successful way! Common sense was the order of the day, the instruction was, “Peel away from you!” Not one of us was injured. After successfully peeling our hazel, we chopped it into small enough pieces to fit into an old biscuit tin. Then this was placed on the fire! It was sizzling hot - simmering!

Finally our day ended with a treat: popcorn! It popped on the open fire, (cooked in 2 sieves held between hazel branches - we all took notes!) Clearing away was of the upmost importance, we had to leave no sign of us ever having been there! Gareth had two more sets of visitors later in the week, so the fire hole and chemical toilet were to stay for the duration. However as an experienced coppice worker he knew he had to leave the forest pristine, as he had found it.

Thanks all around were the order of the day, (North Lakes are well known for their exquisite, excellent manners!) A great day was had by all, fabulous, fantastic and fun filled.