children and musicians who took part in the third Penrith Schools’ Transition Choir concert.
The choir is made up of pupils from 12 primary and secondary schools, involving more than 200 children from the Eden Valley and beyond. This year the project, led by BlueJam Arts and North Lakes School has been self funded by contributions from participating schools and the proceeds of last year's concert. The aim of the project is to develop musical transitional links between years five and six at primary school and secondary school students.

The choir is directed by inspirational music and creative director, Jilly Jarman, who's passion and musical skills, have inspired the schools taking part through workshops back in school and whole choir rehearsals at Ullswater Community College.
Mr Soulsby, Transition Choir Co-ordiator,  said: “We are extremely proud of these talented youngsters and it was a memorable occasion for the talented musical youth of Penrith, who are the musical future of this town’s strong musical culture. This project would not be possible without the musical direction from Jilly the students, teachers, musicians and parents.” 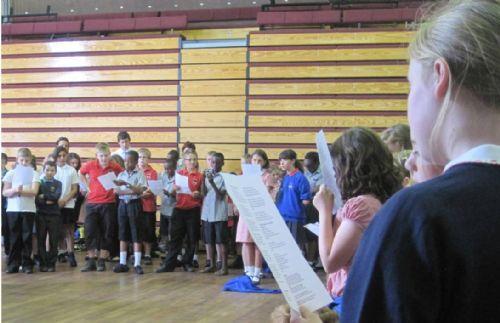 The primary schools taking part this year were North Lakes, Stainton, Skelton, Beaconside, Lazonby, Calthwaite, Temple Sowerby, Milburn, Yanwath Plumpton  and Hayton, along with Ullswater Community College (UCC). This year, the choir was accompanied by Jilly, Mouse, Sarah Wallcook and BlueJam Young Music Leaders, who also led songwriting workshops at UCC, with the World Premier of their songs being at this year's concert.
The songs learned are from a range of musical genres and were uplifting and musically challenging for the children they included songs from West Side Story, Carmen, The White Stripes and their own original work. The audience experienced lush harmonies, intricate rhythms, Samba Drums an Operatic Stage Fight and Docker Reid's Olympic Torch during 'Let My Feet Have Wings' written by youngsters from all across the NE and Cumbria as part of the Hadrian's Wall of Sound Cultural Olympiad Project.
In addition to the choir pieces, school also sang individual pieces showcasing the talents of it's pupils. The concert was the culmination of the children’s hard work and showed their enjoyment of singing.

JENNIE'S REVIEW
On Wednesday 4th July 2012, North Lakes Years Transition choir went to perform with other school choirs at the Summer Transition concert at Penrith Leisure centre. We had been practicing over the past few months with other schools down at Ullswater Community College’s Cumberland hall, on songs lead by Jilly Jarman, Mouse, Sarah Wallcook and BlueJam young music leaders.
On the night we sang a variety of excellent songs such as Carmen, America, Friends, topped off by a solo piece from each school. As a school, we sang a song written especially for the Queen’s diamond jubilee, called “Sing!”, gaining an amazing round of applause from our families and others in the audience.

This is what some members thought of the event:

It was great singing all together and embracing everyone’s voices! Overall, it was a wonderful concert and as for North Lakes School Choir, well we did ourselves proud!
Top