Could the next Andy Murray be in this picture? 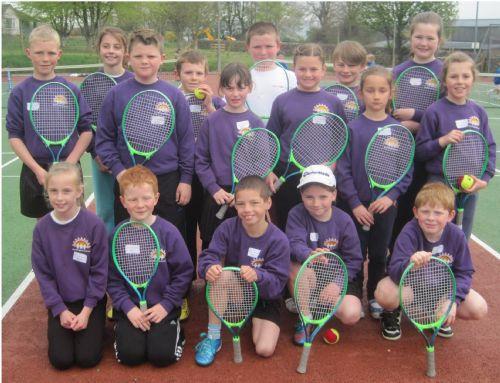 Sixteen pupils were selected from Years 3 and 4 to enter this district tournament. Working in teams of 4, (2 boys and 2 girls), the children worked hard playing individual games against pupils from other large school, Stainton, Hunter Hall and Warcop.

Many players had attended tennis club with coach Rob Ivinson earlier in the year but for many players it was their first experience of this competitive game. All teams showed a real resilience to keep going and a great determination to win. There were many individual successes throughout the tournament and all teams played well. Team A and B narrowly missing out on a place in the semi finals.

Tennis club will be running again in the Autumn term so why not think about signing up and giving it a go. Rob also runs a saturday day club at UCC for all abilities starting at 10am - 11am costing £3 a session. Andy Murray, watch out - it may be a North Laker to take Wimbledon in the near future!