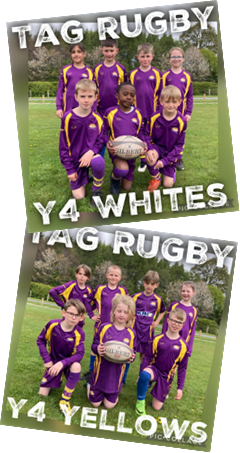 Four teams from North Lakes took part in the Eden Valley Tag Rugby Festival in Penrith on 28 April, and what fantastic skills, sporting attitude and teamwork they showed. Determined defending, fast running and skillful passing combined in some great performances, and the four teams together won 17 games, drew one, and lost only three!

Two young teams from Year 4 showed bags of energy and enthusiasm, both winning 5 and losing just 1 of their matches. A great start to their rugby careers!  Well done to the NLS Y4 Whites: Archie Mc, Jack Si, Logan, Maxwell, Maya, Obed and Rowan; and the NLS Y4 Yellows: Alfie D, Alfie I, Ava-Mae, Baxter, Harlan, Holly and Will! 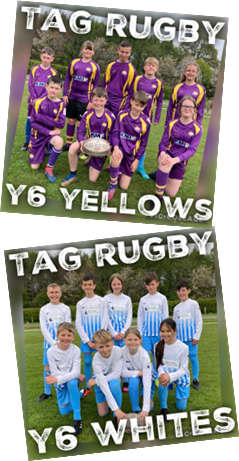 The competition for Year 6 was tough and there were some thrilling, end-to-end matches. NLS Y6 Whites defended magnificently and showed great collaboration, winning all four of their games to top their group. Their results were 4:3 v      Langwathby Blue, 6:4 v Clifton, 6:2 v Stainton Green, and 7:2 v Penruddock. Top try scorers were Devan with 8, and Mario and Millie with 4 each. Well played to them, and also to Daria, Ella, Finlay, Francesco, Harry W and Layton!

NLS Y6 Yellows showed resilience and talent in a very strong group. They won three matches: 11:4 v Langwathby, 8:4 v St.Catherine’s, and 8:7 v Skelton. They drew 5:5 in a tense game with a strong comeback against Stainton and only lost narrowly to  Beaconside, 7:8, in a terrific match. Amongst a feast of tries, Harry F scored 10, and Nathan 9; Alex and Noah bagged 5 each. Congratulations also to Crystal, Hannah, Harry R, Lola and Jack R!

Thanks to all our supporters and staff on the day, who gave the children such  confidence. Well done to Eden Valley Sports Partnership for a great event, and to the excellent referees from QEGS Sixth Form. And  congratulations to all of the children involved, for representing us so well!