Peter Murphy is one of Carlisle United's greatest ever players. He played 417 times for the Foxes, more than any other outfield player 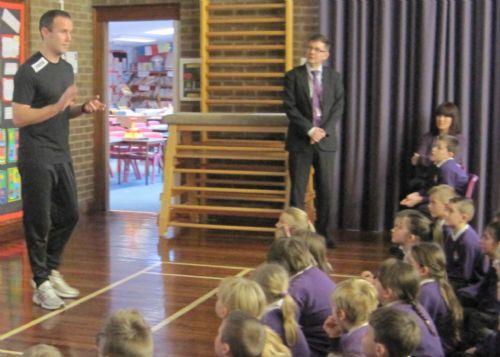 in their history. He scored some really important goals, including two winning goals at Wembley, in the Championship Play Off Final and the Football League Trophy Final. Peter Murphy has represented his country, the Republic of Ireland, and is now playing as a defender for Ayr United.

Peter was invited in to assembly to talk to the children about his career and to share the reasons for his success. Peter spoke about his childhood in Dublin, his trials with many top teams and his early career with Blackburn before moving to Carlisle. He told the story of his memorable goal in the 2011 League Trophy Final, when he was exhausted, only a few days after the birth of his first child. He told the children how important it is that you believe in yourself, so that you can keep going and deal with disappointment in life.

Peter’s said the biggest secret of his success was pushing himself - his hard work and determination meant that managers trusted him and relied on him because he would never give up. Peter then signed over a hundred autographs, taking his time to talk and share a joke with the children. He proved an outstanding role model for the children and we look forward to meeting him again in the future.