Transition Summer Concert. Some children also attended Saturday Transition Singers and Instrument Days where they could have extra practice to be in the Ensemble at the concert! 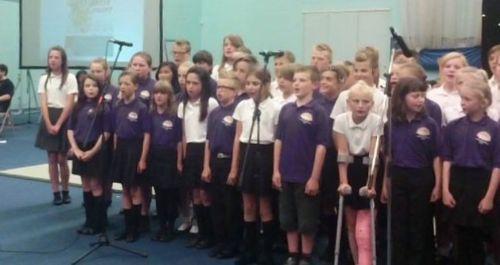 The concert finally came after hours of rehearsing on Wednesday 2nd July and as there were at least 600 people in the audience we all had butterflies in our stomachs but we were ready to perform like stars. In addition a few people from our school played in the Ensemble, including myself, and I played the flute along with guitars, violins, cello, and clarinet from the amazing BlueJam. Furthermore there were 450 children singing songs altogether from 24 schools – it was so good to have the opportunity to meet and get to know people ready for eventually moving on to our secondary schools.

Lots of schools did their own songs however some schools did their songs in collaboration with other schools. We performed ‘I Got Soul’ by the Killers in collaboration with Beaconside – we only managed to have one rehearsal with the band the week before and then two very quick rehearsals together on the car pack at the back of the Leisure Centre! It worked really well and was a great team effort from our two schools! We sang our hearts out and got a big round of applause and we were so happy with our performances. A massive thank you to Mr Soulsby, who was a really good conductor, the super talented Jilly Jarman with the fantastic BlueJam who worked their socks off! I can’t wait until next year!