This summer we have celebrated North Lakes School’s 50th Anniversary. Formerly known as Wetheriggs School, North Lakes was opened in 1972. At that time the children from County Girls’ School moved out to Wetheriggs from the building is now Brunswick School, and Wetheriggs remained a school for girls until 1979, when it became mixed.

Wetheriggs was a brand new, showcase school, led by headteacher Edna Sharpe. With its “open plan” layout, all on one level, it was designed to minimise barriers for pupils with disabilities. This enabled the school to be very inclusive from its earliest days and over the past 50 years it has enabled pupils with many needs to integrate and learn successfully with their peers.

This summer, we were delighted to receive birthday cards and contributions from past and present staff, parents, neighbours and friends, which were compiled into an impressive display of photographs, documents and memories. It was great to be able to celebrate, together with children and the community, after such a difficult couple of years.

On Sing Up Day, the children and staff donned fancy dress costumes on a 1970s theme. They enjoyed a slice of 1970s style birthday cake and took part in a Singathon in the School Hall to raise library funds and then performed for a supportive audience of parents outside. Children premiered a new song “NLS50 Anthem”, written with the children by local composer Jilly Jarman; they sang the 2022 Sing Up Day song “Love As Our Guide”, and “Spirit of North Lakes”. Ruby, Lauren and Elsie also starred with some great messages on Border TV - along with Mr Pincombe and Mr Soulsby, in wigs and costumes which they later regretted when they watched the news! 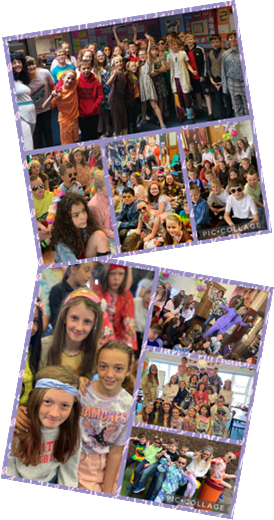 Parents joined in with a very well supported prize raffle, and families later enjoyed a 50th Anniversary Quiz including trying to spot some of our more senior staff members, snapped in some classic photos during the 1970s!

In the evening, the display of 50 years of memories was opened in the Hall and current staff and governors were joined by many others with connections to the school over the past 50 years. These included original teaching staff members Nora Askins, Iona Dowman, Mary Wood and Susan Spruce, past staff such as Sue Rainsley, Gary Newman, Shona Mandale and Pamela Batley, along with past governors including Jackie Westgarth and Roger Mandale. We cut and shared a beautiful 50th birthday cake, provided by Cakeability Carol

The 29th June was a great day and a really special celebration. Thank you to everyone in our school community, past and present who supported the event .

Our children and families at North Lakes are very special, and the theme that shone through the day was the unique character and spirit of the children over the past 50 years.