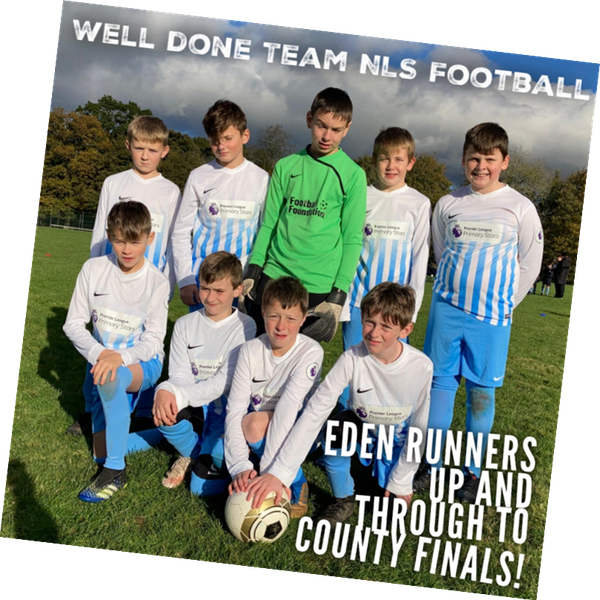 Our Year 6 football team has enjoyed a really successful term. A squad of nine were picked from a strong pool of talent in Years 5 and 6, and they progressed really well through a number of competitions.

The next step was to go through to the Eden Valley Football Finals at Appleby. Our team shone once again, and worked really well as a team. Playing five games, they conceded only one goal, winning two games and drawing three.

As runners-up in the Eden tournament, North Lakes progressed to the Cumbria Football Finals, played in Carlisle.   Our team played seven games in an exciting morning of really high-quality football against the best teams in the county, and North Lakes competed very well in every game.

Many games were tight because attack and defence were strong and the teams were well matched. We drew 0:0 with Stanwix, Appleby, St Columba’s (Barrow), and Yarlside (Barrow). North Lakes played brilliantly against Inglewood (Carlisle), winning 2:0 with two great goals set up by Noah and scored by Harry F.

North Lakes lost 2:0 against a strong Belle Vue side (Carlisle), and after taking the lead in our final match, with  another goal from Harry F, we lost 2:1 against St. Michael’s (Dalston). Well played St. Michael’s, who are the Cumbria champions and who will now compete in the National Finals!

Congratulations to Harry F, Harry R, Harry W, Jack R, Jake P, Layton W, Liam A, Nathan R and Noah F for playing some great football. They improved throughout the event and represented the school with a very sporting attitude which made everyone proud.