Well done to the footballers of North Lakes School who took part in two competitions this Spring term. Early in January, two teams of boys and girls played in the Penrith District School Sports Association League tournament in Penrith. Both teams showed character and resilience, working hard and keeping going, although this was a tough competition against some big schools. The eventual winners of the competition were Appleby School who beat Beaconside in the final. 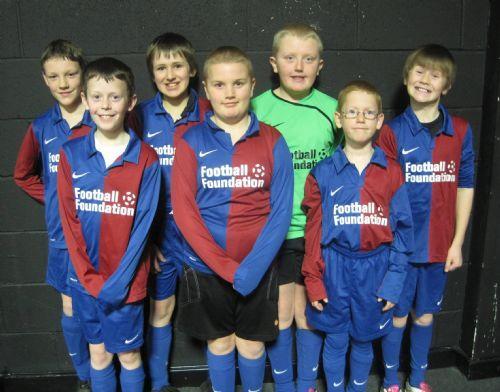 Congratulations to our A Team: Robbie S, Tyler S, Daniel L. John McC, Jordan B,  Jake D and Theo G - and to our B Team: Jamie P, Luke B, Suzanne G, Amelia T, Scott W, Bradley A and Morgan E who represented North Lakes very well indeed.
Later in January, a squad of eight children travelled to the Sands centre to take part in the News and Star Five-a-Side competition. The team again worked hard and as the tournament progressed they gained confidence and improved as a team. North Lakes won one, drew one and lost two, finishing fourth overall in their group, but they showed real progress over the day as they adapted to the conditions and the challenge of the tournament. Well done to Robbie, Daniel, Jake, Jamie, Suzanne, John and Jordan.
Overall our footballers showed good effort and teamwork and really enjoyed the opportunity to compete against some very good local teams.
Top